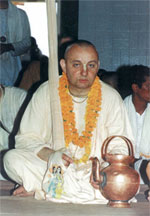 The day after my initiation, Srila Prabhupada went to Logan Airport to fly to New York. This time I went with the devotees to see him off. Prabhupada sat in a waiting room chair while we sat in a great mass on the floor in front of him. He chanted japa, so we chanted japa. I was more or less in the middle of the group. Like everyone else, I had my eyes on His Divine Grace as I chanted.

The “lunar mind” and its internal dialogue of despair.

Srila Prabhupada made a lifting gesture with his left hand and in an almost urgent voice said, “Yes!” I offered my humble obeisances to his lotus feet.

The purport is not (of course!) that of all the devotees present in the waiting room, I was singled out by Srila Prabhupada as the superior japa-chanter. He was teaching me the means by which I could get free of my internal dialogue of despair even when I was not in his personal presence. Yesterday he’d given me the Hare Krsna Mahamantra. If I kept chanting it in connection with him, my spiritual master, as I was doing there in the airport, then I would be chanting nicely. Then I would be nice, no matter what my despairing mind might tell me. I would be in Vaikuntha.

I am still chanting Hare Krsna today only because of the lessons I learned from His Divine Grace in Boston of July, 1971.

Those lessons are my only hope.

All glories to Srila Prabhupada!