The Shalagrams of Shridhar Maharaja 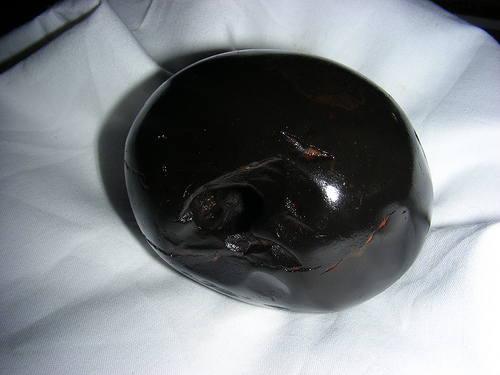 Devotees appreciated the recent article on Shridhar Swami about Kirtan Sagar (Dandavats: “In the Dungeon With Shridhar Swami”) so much that I am submitting another piece about him. This one discusses his worshipful Shalagram Shilas, and it was written by my dear friend and Godbrother Shriman Suhotra Maharaja (who as Roger Prabhu actually assisted me in the bookbindery of ISKCON Press in 1969).

Suhotraji found in Shridhar Maharaja a companion with whom he could reveal his mind, noting that they had much in common. To which the Jolly Swami would reply that what was really important was that they shared the same initials! Sadly, another detail—unknown at the time—would be that within a very few years of the meeting described in the following piece, they would both leave the world and go back to Godhead from Shridham Mayapur.

The following is from an entry into Suhotra Maharaja’s diary, written for the Vaishnava community, dated 14 April 2003. That is the day of the solar new year when the Sun enters Aries called Mesh Sankranti:

Sunday afternoon I visited HH Sridhara Swami Maharaja at his “Nrsimha Kutir.” On the ISKCON Juhu land, besides the big temple and guest house, there is an apartment complex that has stood here since before ISKCON bought the property. Gradually all the nondevotee residents of those apartments moved out; now the building is occupied by ISKCONians only. So HH Sridhara Maharaja stays in one apartment where he worships his three amazing Nrsimha shilas and one Sudarshana shila.

I wish I could publish here a photo of his big Nrsimha shila, but with Madhu Puri being in Bhubaneshwar there is no digital camera for that. Anyway, the shila is truly amazing. And the story behind Maharaja’s getting it is also amazing. He used to worship Nrsimha shilas gifted to him by HH Indradyumna Maharaja. But a few years back these shilas were stolen from a car he had been traveling in while visiting America. So Maharaja felt very bad about this, of course. Then an astrologer told him his shilas would return.

So recently it happened that a devotee came to tell Maharaja that in a shop just near the Juhu temple, a man was selling shaligram shilas along with Rudraksha beads (the kind of beads the Shaivites chant on, just as Vaishnavas chant on tulasi beads). Maharaja went to that shop and was attracted to one particular shila. This form of the Lord is quite large and round, the size of a small melon, and very smooth. And he has a mouth. This mouth is simply amazing. If you look into the opening you can see that the mouth cavity is much larger inside the shila. The inner sides of the cavity are shaped as perfect chakras.

Now, the traditional account of how shilas get their different shapes, particularly the chakra marks, is that in the Gandaki river in Nepal where shaligrams are to be found, there dwell special worms with tusks that carve markings into the shaligram stones. It goes without saying that modern scientists will scoff at such an explanation. They call shaligram shilas “ammonites,” meaning a kind of fossil stone formed from the shell of ancient creatures of the nautilus type. When I saw this big shila I understood how deficient this “scientific” explanation is.

This is no fossil. This is a big round stone with a hole in the front that inside expands into a large chamber carved in a chakra shape. Looking at it, logic impels you to conclude that some worm-like animal bored into the stone and did a “tour” around inside of it, then left the stone through the same hole it entered.

The word ammonite comes from the name of a Roman god, “Ammon”, who was associated with rams (male sheep). Male sheep have coiled horns growing out of their heads. Scientists say that in ages past undersea creatures like the nautilus, which is a sort of octopus that has a shell shaped like a ram’s horn, died and by some process science can’t really explain, turned into ammonites, spiral stones that look like the horns of the rams of Ammon.

In places like Whitby, England, there are such stones one can find along the sea beach that could be fossils of the nautilus. Actually you can see these stones yourself by typing “whitby” and “ammonite” into your Internet search engine. You’ll come to websites where such stones are pictured. And you’ll notice they do not look like shaligram shilas, even though, yes, ammonites and shaligrams sometimes show similar spiral chakra marks. Anyway, HH Sridhara Maharaja’s shila makes a farce out of the “ammonite” theory.

The man in the shop selling the shilas had put a price tag on this particular one for Rs 21 000! Maharaja preached to him that a shaligram shila is Vishnu. Anyone who sells a Visnhu shila goes to hell for the entire duration of the universe. The man then offered Maharaja any shila in the shop for free–except the big one! Maharaja kept preaching and insisting he wanted only the big shila with the cakra mouth. And the man ended up giving the shila to Maharaja without cost! Jaya Narasimhadeva! From other sources Maharaja got two ugra-Nrsimha shilas, plus the Sudarshana-chakra shila that was the first shila ever to be worshiped by HH Indradyumna Maharaja, when he took sannyasa.

So the astrologer’s prediction was not wrong.

I so much appreciate Sridhara Maharaja’s mood. He has realized that management can’t solve our most fundamental problems in Krishna consciousness. Only Krishna can do that. And Krishna does that in His own way, according to His own plan, because He is independent and supreme and all-powerful, and charmingly clever, too. But Maharaja does not take Krishna’s supremacy over all as an excuse to be obstinant towards management. Rather, Maharaja perseveres. He has a strong will, not a strong “won’t”. And thus he continues to go forward. Seeing his example, many devotees are inspired in their own spiritual lives. I am one of them.

Sridhara Maharaja has started a computer media preaching mission he calls VAST (the Vedic Academy for Spiritual Technology). I told him a story from a darshan Srila Prabhupada had with the BBT Library Party in Chicago 1975. I was a member of that party, so at one point in the discussion I asked Srila Prabhupada about Vedic technology. This question was impelled by my meetings with professors at universities. When I showed them the BBT books, they wanted to know if they explained anything about ancient Vedic technology like brahmastra weapons and vimanas (airplanes).

All Srila Prabhupada told me in reply was, “Vedic technology means Sri Guru Parampara.” It was a very short answer. But it was enough. I consider it an extremely important sutra, because technology is the means by which a society progresses. Modern society progresses by material, scientific technology; Vedic society, which ISKCON represents, can only progress by following guru-parampara. If ISKCON does that, it can overtake the world, just as nowadays the Western scientific-technological culture has overtaken the world.