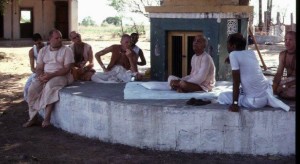 In the early days of ISKCON back at 26 2nd Avenue, Brahmananda Prabhu was all-pervasive. Whenever I would stop in at the Matchless Gifts, he was always parked Buddha-like on the rug chanting on his big red beads. He spoke rarely: he controlled the atmosphere simply by his glance which could be intimidating. Once when a guest inquired, he happily explained his name, “One who only likes only transcendental bliss.” I never forgot his presence and later when I wrote to Shrila Prabhupada from New Mexico that I wanted to re-join the NY devotees, His Divine Grace wrote back, “Yes, go to New York. Brahmananda will take care of you.”

Since Brahmananda’s recent sudden departure, everybody has learned something more about his tremendous contributions to ISKCON, how he was the first President, got the Gita published, opened Africa, was the longest running secretary for Prabhupada, his trip to Pakistan, etc. But not much has been said about something that really stands out about him. Brahmananda was the first sankirtana leader in New York. Everyday he marched his saffron army for many hours up and down the streets and avenues of New York City playing the mridanga. The ta tat tum of his drum actually echoed off the immense skyscrapers and put the Hare Krishna Movement on the map at a time when ISKCON amounted to less than a hundred devotees spread over seven centers. In that way he got book distribution going from the earliest days, beginning from the pamphlet, Krishna the Reservoir of Pleasure and Who Is Crazy. He explained that a guest had told Prabhupada that people would think devotees crazy. So in response Prabhupada delivered a long lecture which became the pamphlet describing the insanity of life without Krishna consciousness.

I ran across some Brahmananda katha I wanted to share with the devotees. It was scribed by HH Suhotra Maharaja from his In2MeC diary and dated Kolhapur, Maharashtra, 7 January 2003. It can be found at www.suhotraswami.net. In the diary entry Suhotra Maharaja shares a lesson that Brahmananda Prabhu taught him:

“In 1978 I had an extremely vivid dream of Shrila Prabhupada. It opened with me finding myself in a forest at night. Up ahead I saw an encampment—a group of persons seated in a ring around a fire under a very large tree. I came nearer and discerned these men to be sadhus. All at once I was astounded to see that on a simple wooden platform placed in the center of the group sat Shrila Prabhupada! He was wrapped from head to foot in a brown chadar. I ran forward and fell prostrate in the dust, His Divine Grace on my left, the campfire on my right. Not only did I fall into dust, but into shock as well. My sweet Lord, Shrila Prabhupada is here again!

“I raised my head to see him smiling reassuringly at me, his face glowing yet ancient-looking in the dancing firelight, his eyes sparkling yet dark like glistening pools of oil. I couldn’t find a word to say to him. But the only thought on my mind was, “How can I serve you, Shrila Prabhupada?” In 1978 that was a profound and at the same time poignant question, now that His Divine Grace had physically departed this world. He nodded his head from side to side in his characteristic manner and, still smiling, said only this to me:

“I awoke. Stunned, I could not take what I had just experienced as anything less than a direct darshan of my spiritual master. I had just gotten from him, in all my worthlessness, a direct order. When I was in high school and college I used to think I was blessed with a talent to write. But in fact it is only a blessing if you can write for Prabhupada and Krishna. It is a curse to write for one’s own self.

“My very senior Godbrother, His Grace Brahmananda Prabhu, related to me that the only time he saw Shrila Prabhupada actually curse someone was when a gifted disciple turned down writing for Prabhupada to write for himself. Shrila Prabhupada offered that, “If you desire to make a name for yourself as an author, we can give you all the credit for writing Nectar of Devotion, which is ready for publication.” This person refused, got to his feet and turned to walk away from the spiritual master of the universe. In transcendental anger, Shrila Prabhupada called after him, ‘Those who are envious and mischievous, who are the lowest among men, I perpetually cast into the ocean of material existence, into various demoniac species of life. Attaining repeated birth amongst the species of demoniac life, O son of Kunti, such persons can never approach Me. Gradually they sink down into the most abominable type of existence.’ His Divine Grace actually cited only the Sanskrit of these verses (Bg 16. 19-20), but there you have the meaning. And indeed this person sank into abomination and many years later died most painfully of AIDS.

“Save me, Srila Prabhupada! Please accept this attempt to serve your lotus feet.” (end of diary entry)